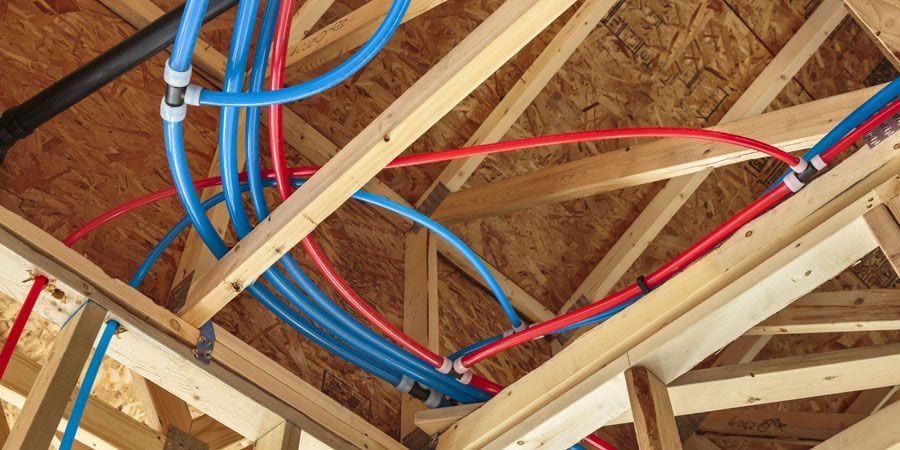 Broken and corroded pipes got you down?

Pipes have a lifespan like anything else, and eventually you’ll have to replace them. While we can occasionally repair pipes in your walls or crawlspaces, when we find leaks beneath the slab we must start discussing replacement pipes.

If your home was built in the 1980s or earlier your pipes may be made of polybutylene. This particular substance got banned in the 90s, specifically because they tend to burst when they’re under too much pressure. We’re not even allowed to repair them because they are no longer up to code. When they’re gone, they’re gone: at that point, you’ll need to totally replace all your pipes.

Galvanized pipes located under your slab may be up to code, but in general they can’t be repaired either. They simply corrode, and you can’t keep patching them up. They were all put in at the same time; if one is going the others are soon to follow.

As it is, galvanized pipes can eventually discolor your water as they corrode away. You wouldn’t want us to repair them repeatedly anyway—we’d have to go into the slab every single time. It’s worth noting galvanized pipe is no longer installed into new construction homes because of all the problems it presents.

Thus, we recommend a replacement when we know you’ve got galvanized pipes, too. Don’t let yourself be sold by an unscrupulous plumber who will try to sell you on a repair today knowing you’re going to need a full pipe replacement tomorrow. They’re willing to flush your money down the drain, but we aren’t. We’re going to tell it to you straight.

However, there is one type of pipe that’s worth repairing

If you have copper pipes under your slab, we’ll recommend repairing them. They’re easier to work with. Copper repairs are reliable, and if they are less than 25 years old we’re happy to save you a bit of money by patching them up.

First, copper piping isn’t in everyone’s budget. Second, copper isn’t the most beneficial piping solution out there. There’s a more affordable piping system that blows copper away when it comes to design and utility.

“The biggest revolution in plumbing since the flush toilet.” – Family Handyman

Polyethylene Piping, or PEX piping, is the material of choice for plumbers who are trying to help homeowners save money. It’s 1/3rd of the price of copper!

PEX is a flexible material which resists hard water deposits, something that’s especially important to Tucson homeowners. The water here is incredibly hard, after all.

PEX also does not corrode like metal piping does, which puts it one up on just about any other type of piping out there. It doesn’t develop pinhole leaks either, even when it’s exposed to acidic water. In fact, PEX piping lasts longer than copper. You can expect it to keep right on doing its job for 50 years, which means this may be the last repiping job you ever need do within your lifespan.

PEX pipes are not rigid like plastic (PVC) pipes are, which makes them very easy to install. They can make 90 degree turns without the use of any coupling whatsoever. This means there are fewer potential leak sites. Even the best pipe can leak at the coupling, but PEX skips that headache altogether. If we do have to make a turn, we can use a standard compression fitting to make connections between the pipes.

We can run huge lengths of PEX pipe without any problem whatsoever. We’ll bring a big spool of it right to your house and take care of the entire job.

And best of all, these installations are lightning fast, which can reduce our estimate accordingly. We don’t even have to solder them to attach them to fittings. Instead, we use a copper crimp ring and a PEX crimping tool, or we use a stainless-steel clamp. Spend less on labor, spend less on materials. What could be better than that?

The Piping that Reduces Your Energy Bills

You might not realize your pipes have an impact on your energy bills, but it’s true. When you’re dealing with any kind of metal piping you are dealing with heat transfer whenever you turn on your hot water faucet. This means the pipes steal some of the heat you were trying to place inside of your bathtub. If you run out of hot water a lot, metal pipes may be contributing to the problem.

This is just another reason why we love PEX. There is no heat transfer whatsoever. You’ll save money on your water bill…and there may be fewer cries of, “Who used up all the hot water!”

Do your pipes shake, rattle and roll whenever you turn on the water? If it drives you a little bit crazy, then a PEX repiping job is ready to provide you with an answer. Water flows smoothly and quietly through PEX, so you don’t have to hear that “Bang! Bang! Bang!” any longer.

Here’s another reason why we recommend PEX wholeheartedly to every single customer who calls us for a repiping job.

It’s durable from below freezing to up to 200 degrees Fahrenheit. Given the extreme hot and cold temperatures out here in the desert this is exactly the type of piping you need. You’ll have fewer worries about burst pipes when you go with PEX. They aren’t immune, but they’re far more resistant than other forms of piping. As long as you winterize your hose bibs and insulate them you should have zero problems—ever.

Many of our homeowners decide they don’t even want to keep their old, copper pipes after hearing about all the benefits of PEX, even if they could technically hold on to those pipes for a decade or more. We can’t blame them…repiping the home with PEX is a great way to eliminate fears about future plumbing problems. We won’t call them leak-proof, but the likelihood of experiencing future plumbing headaches plummets when you replace all your pipes with this space-age plumbing solution.

We offer a 3-year re-piping warranty that protects you and ensures you get the best materials and craftsmanship in the industry. Why not call us to find out more?

Need to replace your pipes?

Have a plumbing problem?  We are here to help!!